Over the last few months, there have been little things that have happened and events/places we have been to, which i want to remember and would have loved for each of these to have a blog-post each… but life took over and those posts never got written. Besides, some are really small things and others have already passed so i thought i put them all into one big photo post.

So here are some memories from our last few months: 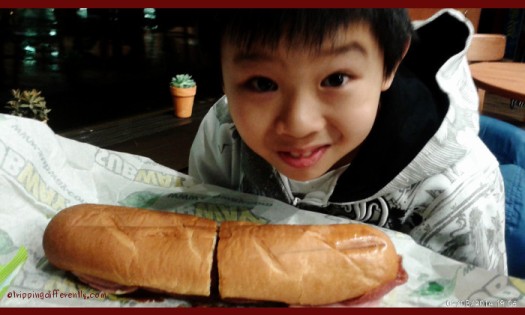 Some time in February, Tobias decided that he would attempt to finish an entire Subway Foot-long Sandwich (a whole 30 centimeters of bread and fillings). He has tried a few times since but has not been successful. It doesn’t matter whether he did or did not finish that huge sandwich; what was important is that he tried and it was fun watching him try 😉 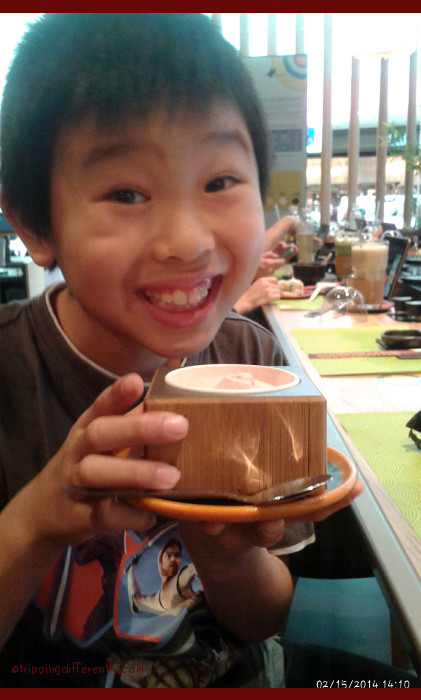 Sticking with the food theme, we found a new Sushi place to eat at. Now if you know have known us (in real life) for some time, you would have been told at some point that our boy is a Sushi-Monster! He LOVES Sushi!! So this is a big thing. Yooji’s serves great sushi and it’s a conveyor-belt system which my boy adores. The other attraction is the tablet ordering-system – very modern, complete with little games and internet access to entertain you while you wait for your food. The only problem is how expensive it is to eat there, especially when he can finish an average of seven plates by himself! 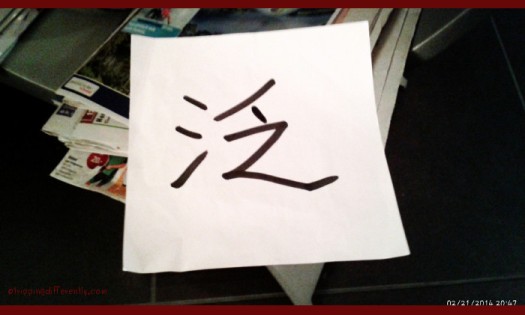 At the beginning of March, Tobias started going to Chinese class again. We had him in one class when he was in Kindergarten but that closed after a year or two due to a lack of students. Now his best friend and his best friend’s brother are going to one, he has decided to join them, which is fabulous. Unfortunately, it is a fair drive to get to class and now the other parents who share the driving have found another teacher much closer so it looks like we will continue with classes but with another teacher. 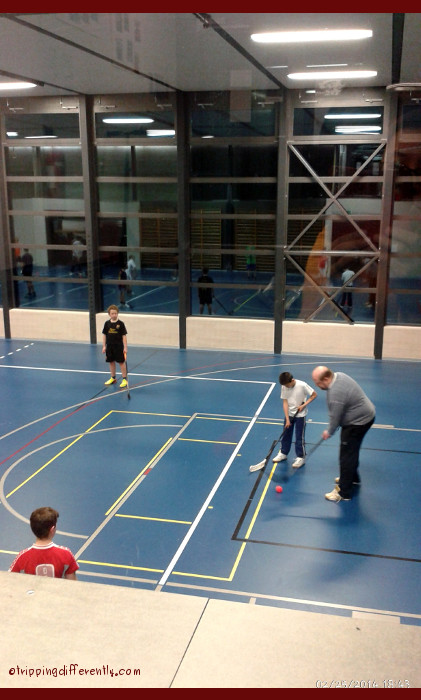 After the Sportsferien (Sports Holiday in February), Tobias picked up Unihockey (floor-ball) and is loving it. None of his friends play this sport but it doesn’t matter, he enjoys it and is making new friends on the team. 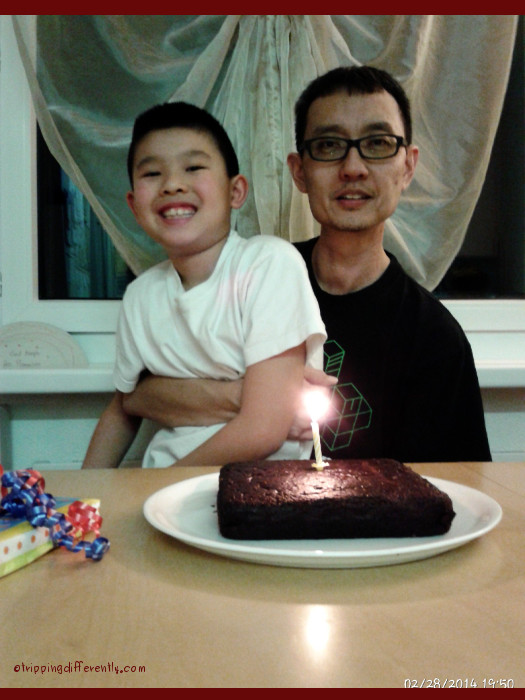 Daddy’s birthday should have gotten a blog post all its own BUT… we had to celebrated it belated and then life got busy. So here’s our little celebration at home with the 6-minute Chocolate Cake. 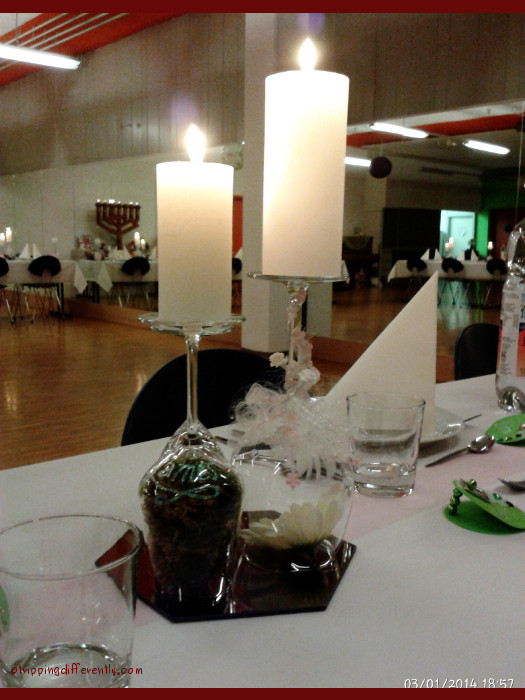 We got invited to a Swiss-American wedding! This was special because we got invited to the dinner, which is a first for us. We got to see how a Swiss wedding dinner works from beginning to end – so very different from ours. It was all about having fun – my kind of wedding! There were games and lots of laughter and conversation; it was a long long fun-filled event – we left early (close to 11pm). We really enjoyed ourselves and it was an excuse to see the lovely city of St Gallen. i’m not posting a picture of the couple because i don’t have permission and because i couldn’t get good pictures. So i’m posting a picture of the very lovely homemade table decorations – i really liked them! 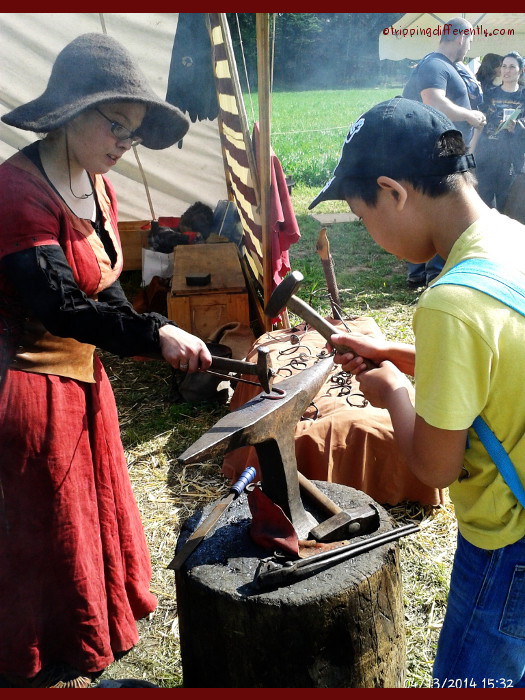 So this year’s English League Premiership saw Liverpool, my husband’s beloved team, having a real shot at winning the cup. Which is the reason why Tobias and i left him with his friends in a pub one Sunday afternoon and went to a small Medieval Festival in Luzern. We enjoyed the sunshine while walking around the stalls. Tobias got to work with a blacksmith and hammered out a small horseshoe. 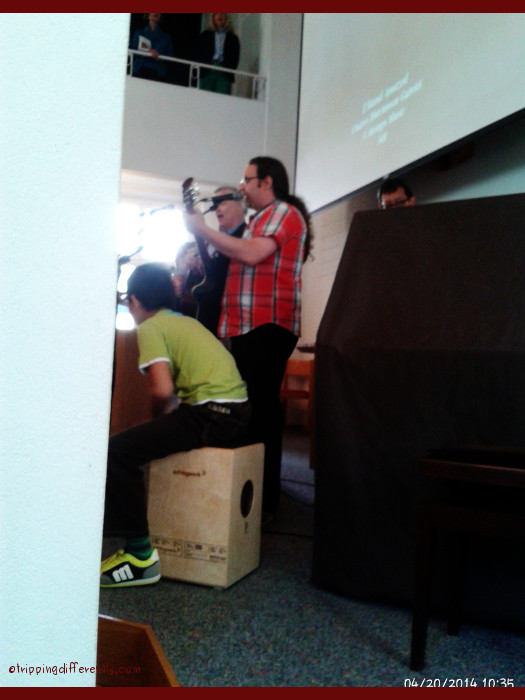 A highlight for Tobias in April was getting to play the Cajón during worship at church. He has been asking and asking to be allowed to play with Daddy during worship and he finally got to do it. He was thrilled so was i and i’m so proud! 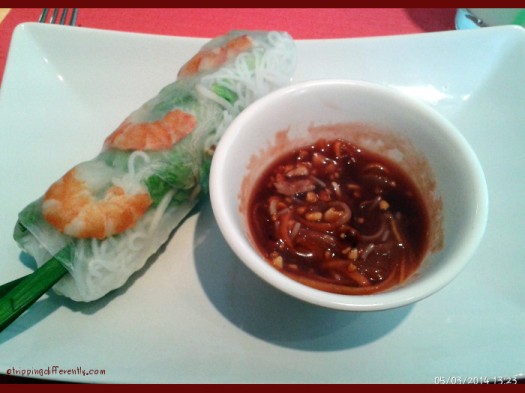 Like a true Singaporean, i bring you back to the food. We (husband and i) got to eat at a small family-run Vietnamese restaurant in Liebefeld, Bern, (Pho Saigon) directly opposite the chinese grocery shop. They serve authentic Vietnamese food and we love it and will definitely be back for more. 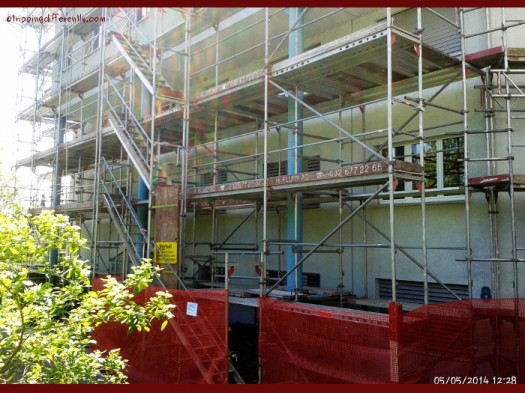 Last but not least, we have been living in renovations since the start of May. The real-estate company which owns our quartier has decided it is time to renovate the facade of our building. So the scaffolding went up and will stay up till the middle of July. Tobias was really excited cos he could open his window and walk directly onto the scaffolding. Of course, that idea was met with much disapproval.

Yes much has happened. Looking forward to a quiet summer holiday – is that possible?