So exactly 3 years ago (well, 3 years tomorrow), i wrote about finally getting my provisional Swiss Driver’s License. Read about it here. You can read about the other steps here and here. 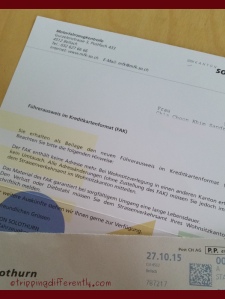 TODAY, i am letting the world know that i have my PERMANENT Swiss Driver’s License! YAH!

Here in Switzerland, they really do make sure you are a safe driver and know everything you can know (without becoming a car mechanic) about cars and driving.

So after those 11 months of practical lessons, theory test, extra driver’s ed, i went for even more driver’s ed class in the last 3 years. Just 2 full day sessions but they did cost about CHF 800/. in total. Click here for total costs of getting a Swiss Driver’s License.

In the first session, which i took about 18 months ago, we learnt about stopping distances and other safe driving technics such as driving over slippery surfaces. We had to drive our cars through various situations and it was kinda sobering to see in real life the actual stopping distance of a car going at just 60km/h. It is further than i thought.

In the second session, which i only took a few weeks ago, we were asked to state how many kilometers we thought we had driven since getting our licenses and to give ourselves a grade from 1 to 5 of how well we thought we drove. Then we piled into the driving school’s cars and drove around the city. On our first go, we drove as we would normally drive. We were assessed by the instructor and by our peers in the car. Our mistakes were pointed out… or i should say, we were advised how we could improve our driving style. We talked a bit about driving in different situations which make us nervous and were shown a video about “Clever Driving”. Then we were shown by the instructor how to drive “clever” and were given another chance to drive, using the “clever driving” method. They had a special measurement device hooked up, which showed exactly how much fuel you were using. The comparison between the first and second drive was quite amazing.

What’s “clever driving”? It’s a way of driving which helps you to save fuel as well as be safer. One thing i learnt was that if i roll to a stop but hit the clutch too early, i am wasting fuel. i should roll to a stop in gear and only hit the clutch just before the car starts to shudder. Quite different from what i was taught before.