This is my 4th review of a Jodi Picoult book so you can say i like her books… a lot. i have read way more than four of her books and have liked each one. But i have only started writing reviews a few years ago.

This one took me a long time to finish because i got really emotional about the story and the characters; so much so that i had to stop a few times, take a break from it, then carry on again.

Picoult’s books are always emotionally draining to read (not a bad thing) because readers will come to care for her characters very much. 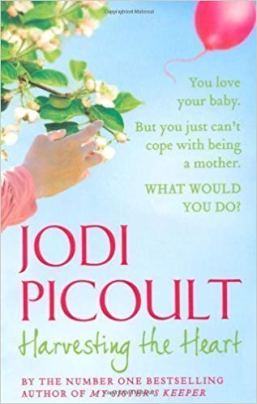 The gist of this story involves Paige, whose mother left her when she was five, and she always felt like she is missing something because of that. Her father tried his best but being a man from a generation which did not express themselves very much, it was hard on Paige. She leaves her hometown, hoping to get into art school in Chicago but ends up falling in love and marrying an ambitious young doctor, who seemed the perfect man. But when they have a baby, her past secrets and doubts about her self-worth and ability as a mother cause her to run as she tries to find answers in her past in order to come back a better mother/person.

This story hits close to home for me because which woman has not doubted herself when she first became a mother. i doubt myself, even now, sometimes. While Paige struggled with her doubts, i remembered how i felt when struggling with similar issues. i also got really angry at her doctor husband who seemed so absorbed in his career and his own family issues. i wished i could have gone into the book and shaken him awake, and i wished i could have said to Paige, “You are doing just fine.”.

If you are a first-time mother reading this, please know that you don’t struggle alone and that you are doing just fine.

By the time i was half-way through the book, i was begging for a quick resolution. But Picoult was not done. There was more to explore and it is worth the effort to stay with the story and worth the wait as the resolution is good.

Picoult has done well exploring the theme of motherhood, not just from Paige’s point of view but also from the viewpoint of her run-away mother and her rather famous and strong-willed mother-in-law.

i am not going to say much more about the story because i want you to enjoy it for yourself. So go read it and let me know what you think.