Oh my goodness, i can not believe that my last book review was way back in February! Now i have been reading all these months but just really slowly because my reading time has been limited by other commitments in my life. As a result, it has taken me up to now to finish this book. To be fair, it is larger than your normal paperback and it is over 700 pages long and is such a weighty book that i don’t carry it around with me, plus i took a break of 5 weeks over the summer holidays to read something else, mainly because i could not afford the weight of the book over my travels.

So now enough whining and onto the actual book review… 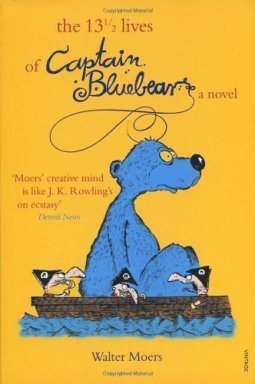 This is a wonderful book! It brings a great smile to my face every time i open its pages and even now as i think about it. Yes, it is the sort of book you will remember for the rest of your life.

The front cover has a quote from the Detroit News which reads, “Moers’ creative mind is like J.K. Rowling’s on ecstasy.”

i would change it to, “Moers’ creative mind is like Douglas Adams’ on ecstasy.” Because while Rowling’s world of magic is amazing and wonderful, it is all rooted in things familiar to us. Think of Adams’ Hitchhiker’s Guide and turn it upside down and inside out, then i think we are close to the world in which Captain Bluebear lives in.

This world of Bluebear with his various travelling companions and friends, such as the Mini Pirates, Babbling Billows, Mac the Reptilian Rescuer, Professor Nightingale (a Nocturnomath with seven brains), Fredda the Alpine Imp who loved him, Qwerty the Gelatine Prince from the 2364th Dimension, the Muggs who roam the Demerara Desert, the Idea named 1600H, Chemluth Havanna the Tobacco Dwarf who became his best friend and many others, will grab hold of you and never let you go.

Bluebear has lived on a pirate ship, on an island where he had to give a nightly performance of crying, on another island which fed you in order to fatten you up and eventually ate you, in the Gloomberg Mountains, in the Great Forest, fallen through a Dimensional Hiatus, in the Demerara Desert, in a tornado and in Atlantis where he made a living as the Champion of Lies! How could you not want to know more?

Bluebear faces lots of different “enemies” such as Hobgoblins, Gourmet Island, a Bollogg, a Troglotroll, a Spiderwitch and even a powerful element called Zamonium.

And the amazing thing for me is that all these experiences and all these characters eventually come together in the final part and it is a great battle to the end.

There are many more weird and wonderful characters, and strange places and things… but i think i have said enough to make you want to go discover them for yourself.

So go get this book and read it. Remember to leave your logic and disbelief outside the door as you enter into the many lives of Captain Bluebear.