So it has been 2 months since i last wrote about my Orphan of the Month. If you remember at the beginning of July, i said that July and August would be the last month we have to contribute to DENNY‘s adoption grant because he will be moved to the Older Boys Grant section on Reece’s Rainbow. See this post.

Well, in July and August, there was, again, no sales; which means i have not been able to contribute to DENNY‘s grant. 😦

BUT… since running the shop and my other responsibilities take up so much of my time, my actual advocacy efforts (i.e. highlighting individual orphans so they get seen) have taken a backseat. Not what i wanted, really.

So looking at the situation, i have decided that i will not be having an Orphan of the Month anymore! INSTEAD, Angel Crafts Shop will be giving 50% of all sales to the Older Child Grant (10+ years old) at Reece’s Rainbow. AND i will be highlighting 2 orphans every month from that list. So in a way, there will still be orphan of the month, just highlighting 2 of them (now it will be called OrphanS of the Month) and fundraising for the whole group of them. 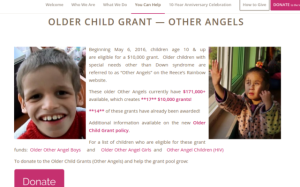 In this way, i am able to keep on giving and also get back to active advocacy for individuals, and also not be overstressed if i don’t have sales for a couple of months, i know i have 5 months to try and raise some money for each group of older children.

So this month kicks off my fundraising efforts for the Older Child Grant for Other Angels!

i have also been thinking about the direction of Angel Crafts Shop itself; in terms of what crafts i would be making for sale. So stay tuned for news on that front because there will be big sales to sell off current stock and then launching of new stock in the new year!

In the meantime, keep shopping at Angel Crafts Shop so that you can help to grow these children’s adoption grants, which gives the family who steps up for any of them a better chance of reaching them before they age out of the system.

Thank you very much for your continued support!