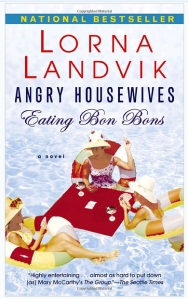 First of all, i LOVE the title of this book! And i loved it even more when i found out that that is the name of the book club which is the centre of action in the book; the AHEB (Angry Housewives Eating BonBons).

Second, i apologise as i will be skimming over the details of this book. i read this for my own book club meeting at the beginning of May and my memory isn’t what it used to be. But i liked the book and remember enough to want to talk about it some more.

Ok onto the book review proper…

The first few lines of the book (Prologue) immediately grabbed my attention and the writing style and story-lines held it all the way through the book.

“I knew all about having my life saved. When I was three years old, I broke free of my MawMaw’s callused grasp to chase a paper cup skittering across the street at the same time a jalopy full of new army recruits careened around the corner. A sailor coming out of Knapp’s Drugs and Sundries, with reflexes I hope served him well in his tour of duty, threw his bottle of Hires root beer to the sidewalk and raced out into the street, scooping me up in his arms. I can still hear the cacophony of squealing brakes, honking horns, and my grandmother’s scream, feel the sailor’s rough cotton uniform on my cheek and smell the soda pop on his breath…”

See what i mean. The writing is not complex but it is full of details which draw you right into the action, right into what the character sees and feels.

Faith, the ‘I’ in the above excerpt, is the main character who is also the one with the biggest, oldest secret in the story. (No spoiler here – i won’t tell you what’s the secret.) However, all the other housewives are so well-fleshed out that you live and feel for each of them as they take turns to tell their part in this story. i like Audrey for her dare-to-live attitude and Slip for her fight-to-the-end viewpoint. Their personal stories both take an unexpected twist. Merit, whom my heart goes out to, is amazing as she tries to keep it all together under an abusive husband and then when it falls apart, raises her girls on her own; not an easy thing to do in the Sixties. Kari, the ‘mother-hen’ of the group, who has her own sad story with a wonderful end, is equally interesting to read about.

i enjoy so much the camaraderie which the women share in those 40 over years they spent together; how they were there for each other at every turn. It is something i do not have – not to say that my life is lacking but such close friendships with people who live on the same street i have not experienced. i have wonderful friends but we are, unfortunately, at this point in our lives, not living in the same country even, let alone the same street. i have always wondered about living with neighbours who became close friends and i got to see that through the eyes of these characters.

The topics touched upon in the book are also varied and of great interest to me. Everything from the war (Vietnam specifically) and the peace marches to marriage (normal, abusive, divorce etc…) and sex; it also covers parenting, adoption, lost of loved ones, relationships and expectations between parent and child, religion, the gay movement/issue, and most importantly, holding onto secrets and its effects. There is no lack of tragedies with regards to all those issues but there are also lots of triumphs as well.

Of course, in those many years, these friends have had their disagreements and fights with each other and the process of healing the broken relationships was never easy. But they stayed true to each other, loving each other, even when they were ‘hating’ the other.

i love it that two of their children would carry on the book club in their own way, just as their mothers did. We leave the Angry Housewives in the midst of another battle in life:

“The Angry Housewives tame a Hell’s Angel, I wrote. Next stop: world domination. I laughed, even though I was a breath away from bursting into tears. I looked at Slip, but my valiant, true friend did not stir, and I stared at the photograph for a moment more before adding, We’re still working on that one.”

i would read this book again some time in the future. (when my to-read list is finally no more… God only knows when that will be – hehehee;) ).